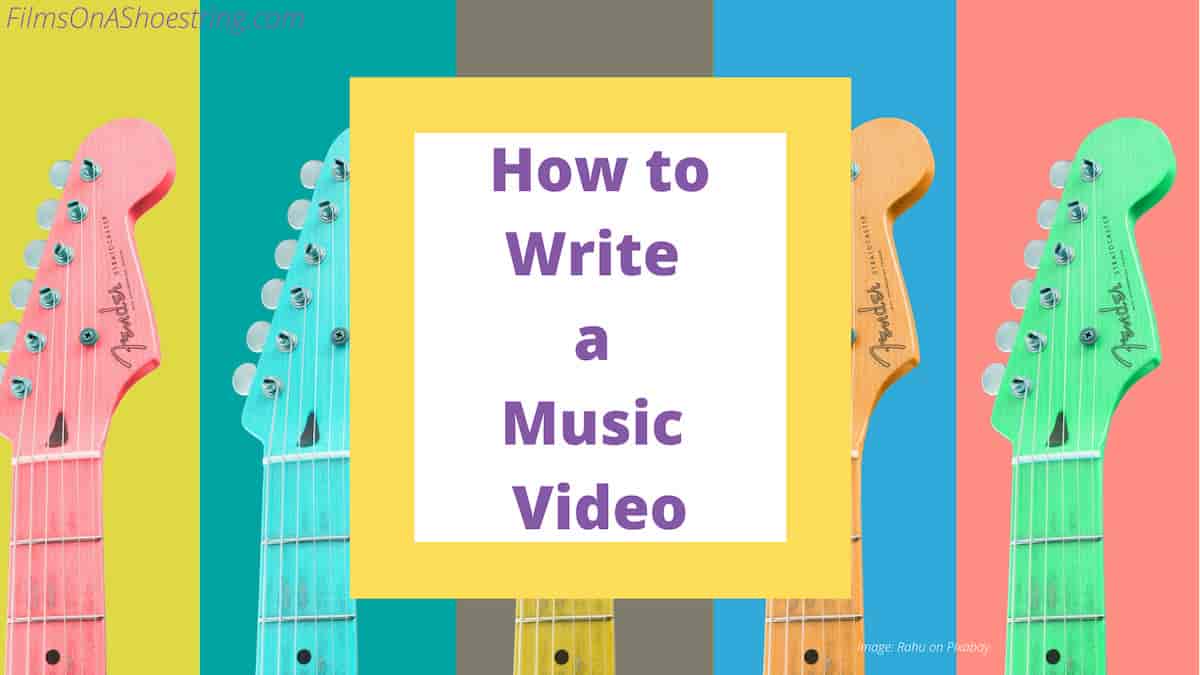 Are you in a new band looking to create a music video for one of your tracks? Or a new filmmaker wondering if music video production is for you? The first thing you must do is learn is how to write a music video, before you go anywhere near a camera.

Without this essential planning and development process, your film shoot will be chaotic, expensive and disappointing. Instead, invest time and effort at the writing page to ensure you know what the final result is expected to look like.

Why Write A Music Video?

YouTube was launched on 14 February 2005 and is now a mature platform serving 2 billion monthly users. More than half of the audience regularly watch music videos.

Many lucky musicians have found their videos so widely shared that global chart topping downloads of their tracks quickly followed. Bands want access to this audience.

Directors, producers and crew have long found music videos a valuable source of work and income. The first musical short films appeared in the 1920s, but it was the launch of MTV on 1st August 1981 with its 24 stream of music videos which really made the industry explode.

Today some directors make a very good career solely from music videos, while the majority gain income and experience from this sector before pursuing other avenues of directing.

If you love the craft of filmmaking, this is a specialism you need to discover and experiment with, even if it’s not your choice for the long term. And the great thing is, you can achieve it with a low budget.

However, take note that it takes as much work to execute a music video as creating a short film. You must have a clear concept, well planned treatment and music video script breakdown to know what you are doing when you come to shoot your music video.

If you’re an experienced professional seeking paid work, you’ll use your contacts and subscription platforms to find music videos pitches. A band’s team considers maybe five carefully researched, discussed and produced pitch documents. They then ask one of them to draw up a treatment showing how the concept translates into a script and storyboard.

But if you’re just starting out, you’ll be working just for the showreel and experience rather than pay. So how do you find the song and band?

You can try making a music video of a cover song or old track. However, all sorts of legal and financial licensing issues arise from that decision so you can’t upload or share it publicly unless you pay for the license.

Instead, why not put the message out that you are looking for a band willing to work with you on making a music video? You can advertise for free on facebook groups and Starnow.

Once you have some replies, there’s a process of the band selling themselves to you and vice versa.

You’ll need to agree what the expectations you have of each other are, and set boundaries and responsibilities. Ideally, do this in writing. Unpaid projects fail all the time because people lose interest or aren’t as efficient, organised or committed as they say they are at the start.

Can I Just Film a Live Performance of a Song?

Live music takes great specialist skills because the lighting, sound and movement all focus on the audience experience.

The musicians don’t stand in the right places and move at the time you want. Audience members walk, dance and jump around. All this impacts on your screen shots.

Meanwhile, the sound quality and lighting are beyond your control, making the footage prone to fuzzy and indistinct visuals and audio.

It’s also worth asking why, in an age where music videos succeed or fail according to their ability to capture and maintain the attention of the easily distracted screen audience, you want to just film musicians playing on a stage.

How Do You Create A Music Video?

The key is in the planning, otherwise musicians, cast and crew hang about waiting on set or important aspects of the shoot get missed out.

1. Listen to the music – repeatedly

Listen over & over again, absorbing the words and emotional core. Keep jotting down different ideas and think about other music videos, films and themes for inspiration.

Even after you’ve found one concept to run with, keep the others. They can be revisited for this music video, or later on future projects.

Pull together a short document, exported as a PDF.

Page 1 has the band and song title so you identify the document quickly in years to come. Add a couple of paragraphs outlining your ideas and the central story of your visuals.

Page 2 is image heavy, with a few words explaining the overall concept or the reason why that image is inspiration for the emotional core of the selected song.

3. Discuss your ideas with the band

After thinking through your concepts and developing one to share, it is difficult to hear others question it. But remember that you may not have communicated your ideas well enough for others to understand them.

Members of the band may also raise their own ideas. Think through whether some elements can be brought into your concept without making it too diluted or complicated.

To see this process in action, and pick up a free template, see Jakob Owens of The Buff Nerds talking to one of his artists about their collaboration:

If you have no experience working on set, two days to record three minutes sounds easily achievable. It isn’t – you need everything provided at the right time in the right location, with no mistakes.

Moving location requires transport, one team to work at and clear the first location while the second team sets up in the second. Gaps between filming days brings added risks of things going wrong too.

Scrap party scenes requiring a pool with 300 hundred (hungry) extras, formula 1 cars, and complicated special effects. You’ll have problems sourcing them for free and it is a needless expense.

UK law demands you obtain Child Performance Licences, chaperones, separate toilets and waiting/changing facilities for every young person who has not yet reached the final Friday of June following their 16th birthday (i.e. completed their Year 11 GCSEs). Other countries have similar laws.

Also, have a quick read about the copyright issues in our article about making a short film. You can’t just film a dog running about in the park or a funfair ride in action without getting the owner’s written consent, yet alone film a stack of vinyl records without obtaining copyright permission.

What is a treatment for a music video? A music video treatment is a document which shows everyone what will happen in every shot, matched to the timing of lyrics in the song.

How to make a treatment? Draw up a document showing time stamped points of the track. On the left have the lyrics on display. On the right, show the visuals or set out the visuals in words:

Hopefully everyone was happy with your concept so will now accept your well thought out treatment. However they may spot a mistake or point of ambiguity.

The time to make final changes is now.

7. How to write the music video script breakdown

Next, go through every shot. Write down

If you need special effects and expensive props, remember you have to pay for these or find a free source. If you don’t have these items offered when planning, avoid a lot of hassle and heartache later by using a cheaper alternative in the treatment.

Once you have got to this point, you’re ready to start planning how to make your music video. That means drawing up the shooting schedules and call sheets, sourcing crew, equipment, talent, costumes and props, arranging catering needs, and securing the ideal location.

All those stages will be easier if you have written your music video with attention to detail.

Making Your Own Music Video

Perhaps you’re in a band and have your own vision of the ideal music video.

Having a say in the look and message of your band’s music video is good. However, music video directors and producers assume a lot of responsibility and inconvenient jobs that get the project done.

Instead, work with someone whose concept work and treatment incorporate your ideas.

If you must, develop your own concept and treatment – but then hand over to someone else to direct and produce.

No one wants to turn up on set to discover the band member running everything leaves half the crew standing by with nothing to do. Meanwhile the other half face meltdown, patching up problems because key props are missing or the lighting equipment isn’t up to scratch for the location.

And if you forget to insure your location, cast, crew and equipment, everything that goes wrong suddenly becomes your legal and financial nightmare.

Put your energy into finding a great music video production team, so on the day you can focus on your performance and enjoy a positive experience.

This article took you through the process of how to write a music video, including pitching, drawing up a concept, treatment and music video script breakdown.

You’ll see from the number of steps outlined that it’s essential to write a music video thoroughly and not just rush straight into filming a vague idea. At the same time, it’s a form of writing which depends on visuals as much as words.

Writing a music video is both exciting and frustrating as it demands a lot of detail and planning while trying to keep sight of the overall concept. But done properly, the writing stage will make the process of shooting the music video script run smoothly and efficiently.

If you can write a music video which turns into both a happy experience and successful project, it bodes well for your future career.